Eugin clinical center is an assisted reproduction center with offices in Barcelona and Madrid. It is one of the European reference centers, participating regularly at major medical conferences and with articles published in prestigious scientific journals. The clinic covers users across Europe, between 80 and 90% of patients are from France and Arab countries, whose average age exceeds 40 years.

The site of Eugin offers information about fertility issues, as well as a small pre-diagnosis test, which guides patients about the best treatment and provides the possibility of requesting information and/or schedule a visit with a medical specialist.

We cooperated between 2015 and 2017 with the communication managers of the clinic. The project objective was to provide an image of warmth, closeness and empathy, where the relationship with the patient was very important. From a communicational perspective the aim was not to extol the doctor but the whole team, in addition for ethical reasons we avoid to show babies. The site also intended to put itself at the emotional level of its users, providing tools to solve their problems as the first step of an experience. For this reason conversion goals were more long term priority.

During the research phase, we performed an initial analysis of the site, writing a report with the following conclusions:

We also held a comparative analysis of the major fertility clinics websites throughout the world, in search of good practices both communication, information architecture and interaction patterns.

With these data, we defined a new architecture of the contents, structure and visual redesign, taking into account the existing elements. 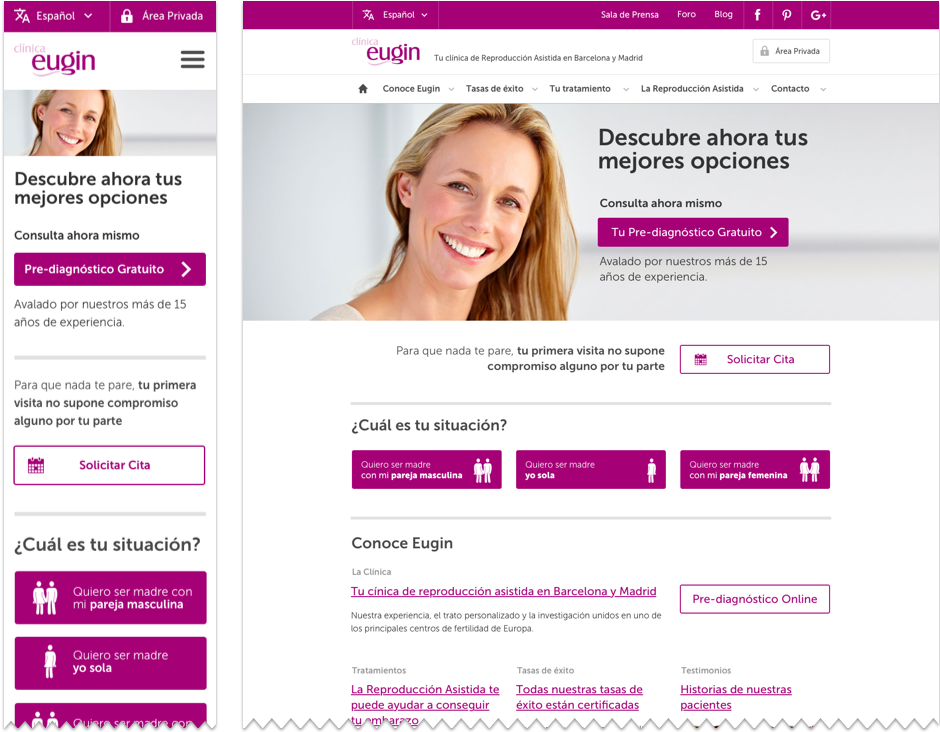 It was decided a simpler and strong structure, supported by a grid 12 columns and 3 layout pages. The color gamut was also simplified with a single dominant color and a second used only for enhancement of CTAs. The project also included the review and optimization of landing pages, which lacked structural and visual consistency.

Later also the graphic line and the templates of the site of the CIRH (a site oriented to male infertility medical center) was adapted, following the same philosophy raised in Eugin.

Once raised and implemented public pages, we continued with the analysis of the private area of the site. The private area is an intensive tool for the patients once they started the relationship with Eugin. This is a direct communication channel where is recorded all interactions between the user and the clinic, from pre-diagnosis, during treatment and completion.

This tool was outdated, both in terms of structure and technology: not being consistent with current graphic image and not optimized for all devices. Also it was too dependent on IT, both data management and maintenance.

We designed a private area consistent with the content and design of the new Eugin website, as an extension of it. We improved the internal tools (email and communication, treatment status timeline, calendar, payment gateway, forms ...) optimizing workflows to make them more efficient and effective in their context of use. 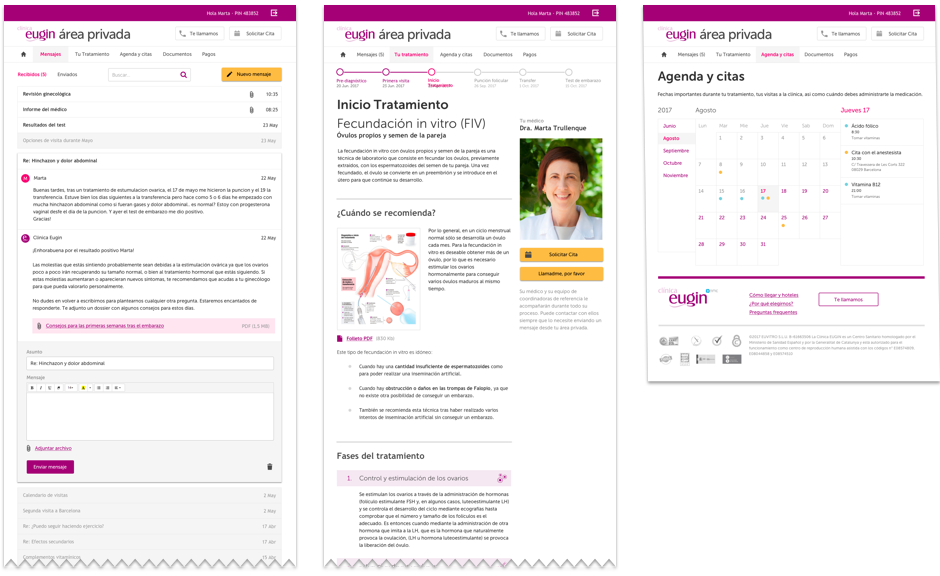 Other samples of our work